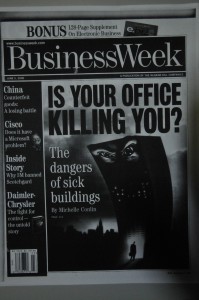 In July 1968, an explosive epidemic of illness characterised principally by fever, headaches and muscular pains affected at least 144 people, including about 100 employees of a health department building in Pontiac Michigan, USA. A defective air conditioning system was implicated as the source and mechanism that spread the sickness, but extensive laboratory and environmental investigations failed to identify the origin of the disease, so it was simply labelled “Pontiac Fever”.

Many years later it was learned that this illness was caused by a bacterium identified as Legionella pneumophila. This name was first attributed to the causative organisms of the 1976 outbreak of a disease that struck 182 people attending an American Legion Convention in an air conditioned hotel in Philadelphia, Pennsylvania, USA. Thirty-four people died from the illness. In Australia’s largest epidemic in Wollongong in 1987, forty-four cases required hospitalisation and fourteen victims died.

Indoor air pollution is a health threat common to buildings, especially modern ones, in many countries. Numerous studies by international health and environmental scientists have documented the widespread nature of the problem. The World Health Organisation estimated in 1989 that 30 percent of all new of refurbished buildings have indoor air pollution.

Between 1989 and 1992 the Harris Research Centre conducted polls of office worker attitudes in the UK, Singapore, Germany, France, Italy, Belgium, South America, Australia and across several states of the USA. Of those questioned, sixty-eight percent thought their work rate would improve in a cleaner, fresher environment. Thirty-one percent admitted to taking two or more days off work each year because of symptoms they blamed on office air quality and seventy-two percent claimed the air in which they worked was often stuffy or stale.

The outcome of two recent claims by employees in the US specifically involving indoor air pollution has prompted management, insurance companies, unions and attorneys to focus on this emerging health issue.

A Florida woman in June 1987 won a workers’ compensation case claiming that she was exposed to pathogenic moulds that caused her to become hypersensitive. The woman’s physician stated that her illness was directly attributable to exposure to contaminants inside her building and that she was no long able to work there. The woman is now receiving medical and compensatory benefits and will continue to do so indefinitely.

In 1988, a California man accepted a $650,000 out-of-court settlement after he claimed that his central nervous system was so damaged as a result of exposure to toxic substances in his office that he was incapable of working. Payment of settlement was split between the building owner and the architects.

To indicate the potential scale of the problem:

A four year study of approximately 400,000 recruits at four US Army training centres found that trainees housed in modern, energy efficient barracks were about fifty percent more likely to contract a respiratory infection than were trainees in older, less air tight buildings. The study conducted at the Walter Reed Army Institute, was published in the Journal of the American Medical Association (1998).

Respiratory tract infections annually account for $15 billion or direct medical care costs, approximately $150 million in indirect costs such as lost income from work through absenteeism in the United States alone, according to a review by Garibaldi and Dixon published in the American Journal of Medicine (1985).

Whether the driving force is the threat of litigation or the push to improve productivity and reduce operating costs, it is hardly surprising to see an increasing focus on indoor air pollution and the study of sick buildings.

Today the term “Sick Building Syndrome” has become interchangeable with “tight building syndrome”. This terminology applies to any building in which more than twenty percent of the employees experience symptoms such as headaches, fatigue, or eye, nose or throat irritation that cease once the employee leaves the building.

The definition does not fit the classical symptoms of Legionnaire’s disease since, with this disease, many of the symptoms become more severe over time. The distinction is due to the presence of an infection that can be determined by medical diagnosis and laboratory tests. Thus, when true infections are identified due to bacteria, fungi, or viruses, they are classified as a “Building Related Illness”. In these cases, the percentage of occupants affected is highly variable. Only two employees need to contract the infection before that building is suspect.

In the case of so-called sick buildings, the problem lies in the internal environment. In our experience, most cases of sick building syndrome are due to indoor pollutants in the air, however, comfort conditions are important since complaints due to cold, excess heat, or draughts are common. Humidity can be part of the problem, as can lighting, noise, vibration, radiation, odour perception and other factors, such as overcrowding, office layout and personal conflicts. These variables can be compounded by the employee’s anxiety about other problems in the workplace.

There is also a complication in the way different people tolerate different conditions. For example, individuals have different metabolism for temperature, causing varying rates of internal heat output and, of course, people dress differently. Also, some people work near windows and are exposed to more draughts and radiant heat.

Considering all these variables, it is impossible to satisfy everyone. In fact, in attempting to optimise any internal environment, the conditions necessary to satisfy the maximum percentage of occupants will still result in at least five percent thereof being dissatisfied. So while it is virtually impossible to satisfy one hundred percent of a building’s occupants, it is possible to alleviate the problem to the satisfaction of the vast majority of employees by correctly identifying the cause of the problem instead of focusing on the symptoms.

After more than 15 years operating and expanding … END_OF_DOCUMENT_TOKEN_TO_BE_REPLACED

Well done to all involved in the construction of … END_OF_DOCUMENT_TOKEN_TO_BE_REPLACED